| CLICK HERE TO DONATE AT OUR JUST GIVING PAGE |

Jeff Connon
Jeff Connon founded the GCC in 2017. A tall, dark and handsome Aussie who studied architecture, Jeff has also played cricket semi-professionally. That was all fifteen years ago, and now he’s the General Manager of the Groucho. 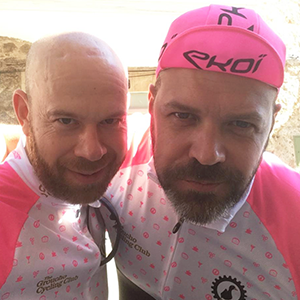 Freya North
Freya North is the best selling author of 14 novels which have been translated into many languages. Her early novels were a precursor to the chick lit phenomenon. Cat (1999) was set deep down behind the lashings of lycra of the Tour de France – but Freya herself only started riding a bike after back surgery in 2017. Joining the GCC without even owning a bike, she then peddled across the Coast to Coast route with the team. She was made President of the GCC possibly, she thinks, due to the popularity of her Lemon Drizzle Cake which the team refer to as The Drizz, possibly because she is alarmingly sweary.  She is currently working on two screenplays and her 15th novel. 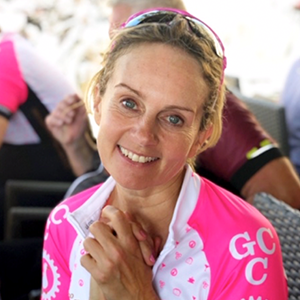 David Flack aka DJ Flacky, Flackster
With his unmistakable gravelly tones and groovy tunes, David Flack is a hugely popular resident DJ at the Groucho Club. Spinning records and attending spin classes are his passion – and, out on the road with the GCC, he can alway be heard telling the other riders “I got your back”. 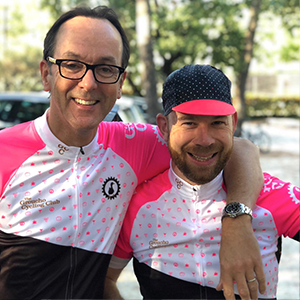 Nick Norton-Smith
Nick Norton-Smith is a composer and multi-instrumentalist based in London, whose chequered career crosses 4 continents, 22 countries and numerous artists. From Frank Sinatra in Monaco to Norman Wisdom in Macclesfield via Los Angeles, New York, Tokyo, Paris, Berlin and beyond. Nick is the veteran of 15 West End musicals, composer for numerous TV shows and also the voice ( “Impossible” you cry!) of BBC1 hit quiz show, “Impossible”. 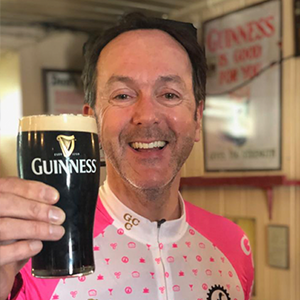 Richard Lewisohn
Richard Lewisohn is MD of Mount Pleasant Studio, London’s most central film and television studio. He is also a photographer specialising in portraits, reportage and interiors. He has completed five charity bike rides over the Alps from Geneva to the Cannes Lions Festival with the Fireflies. He is looking forward to the challenge of cycling 100 miles a day in France with GCC and is hoping for white wine and oysters in Bordeaux, but is more likely to be soaked by autumnal Atlantic storms. 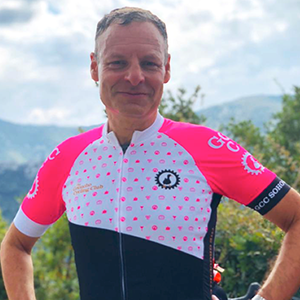 Emma O’Reilly
When Emma O’Reilly joined the US Postal cycling team in 1996, she could have had no idea how she would become a central figure in the biggest doping scandal in sporting history. Yet when Lance Armstrong, starting his comeback from cancer, signed for US Postal, it was Emma, the only woman on the team, who became his personal soigneur – and then, later, the whistleblower. Emma had the strength to break cycling’s omerta by speaking out against the culture of doping. Emma is now a Life Coach, she also founded and runs The Body Clinic, a physiotherapy clinic in Hale, Altrincham. Freya and Emma met on the Tour de France and have been best friends for over 21 years. 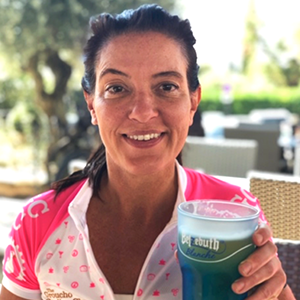 Alasdair Scott-Goddard
Alasdair Scott-Goddard is a BAFTA-winning digital pioneer, Groucho Committee Member and Groucho Cycling Club participant. Alasdair delivered breakthrough projects for Pepsi, Apple, Boeing, Verizon, Virgin, American Express, IBM and London 2012 and worked with the likes of; The Foo Fighters, The Spice Girls, Peter Gabriel, Duran Duran, The Red Hot Chili Peppers, Orbital and Sir Paul McCartney. In film, his work includes motion graphics for Elizabeth, Event Horizon, and the Resident Evil and James Bond 007 franchises.
When he’s not cycling, “being a luvvie” at the Groucho Club  or judging digital / creative awards (from Cannes Lions and D&AD to Creative Review and Design Week), Alasdair can be found hanging out with astronauts, artists, musicians and film-makers in London and LA. 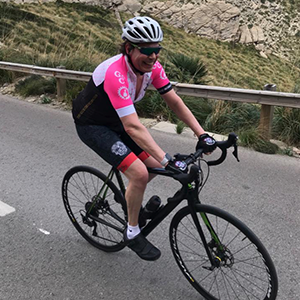 Charlie Talbot
Charlie Talbot is a producer, brand consultant, writer and former stand-up. Charlie once pretended to be German to explain the credit crunch with an oompah band in the most successful show he did. He will turn 40 the month after the B2B ride – so it’s a first shot at a mid-life crisis. Charlie’s TV appearances include “Only Connect” and he helped to set up AFC Wimbledon. He also once played tiddlywinks for the Duke of Edinburgh… 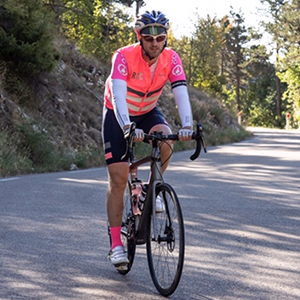 Barry Dudley
Not only does Barry Dudley have 20 years experience of marketing under his belt (helping creative, media and tech people grow their businesses), but he is part of the Groucho Cycling team and a keen player in the Groucho Cricket team. At times, his two sons and his dad have been fielded by Groucho; making up almost half of the team. Coming from a very sporty family, Barry now faces Bordello to Bordeaux by himself with 10 other GCC cyclists. 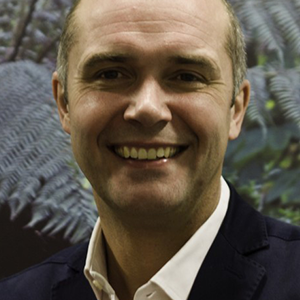 Dan Welldon
Dan is a London-based Photographer and Film Maker of people, portraits, music, sports and travel. Starting his photographic career in Scotland some 15 years ago (having travelled there in the first place to complete an M.A. in European Law), Dan still loves photographing a wide variety of subjects – mainly people (from actors to corporate and musicians) but is also very much interested in travel (fluent Spanish and Italian come in handy) as well as architecture. 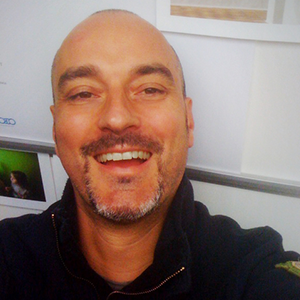 Tudor Fulea
Tudor has been working in advertising and marketing for most of his life and moved to London after assignments in Toronto and Chicago. He recently discovered cycling while recovering from a spine injury thanks to great medical care. Riding the B2B offered the opportunity to give back to a great medical charity while following his passion. Cycling also helps with his other passion, of eating cakes. 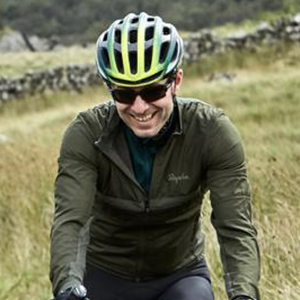